Being an Environmental Management student, I have surprised myself with my lack of knowledge for the range of biodiversity and the various ecosystems of a wetland area, particularly in lowland raised bogs. As part of the course I am studying at Glasgow Caledonian University, so far we have only just touched upon the topic of Biodiversity we are currently more focused on Sustainability issues in relation to the Built Environment and such like. Not that I’m complaining!  I’m really enjoying the course and the diverse range of Environmental issues it covers, however, for me at least, learning more about species, habits and their conservation, is important, which brings me to sharing my recent volunteering experience with East Ayrshire Coalfield Environment Initiative (CEI).

Amongst other things, the CEI aim to enhance the natural environment and landscape, and to help increase public understanding and appreciation of East Ayrshire’s wildlife and its value. They work with various conservation bodies and industry to organize a range of exciting events throughout the year that give individuals the chance to get involved in local projects which work towards enhancing, conserving and promoting awareness of the environment within Ayrshire. (CEI, 2015) I was lucky enough to be given the chance to be part of a dip-well monitoring event at the site of a lowland raised bog at Dalmellington Moss, near Ayr. 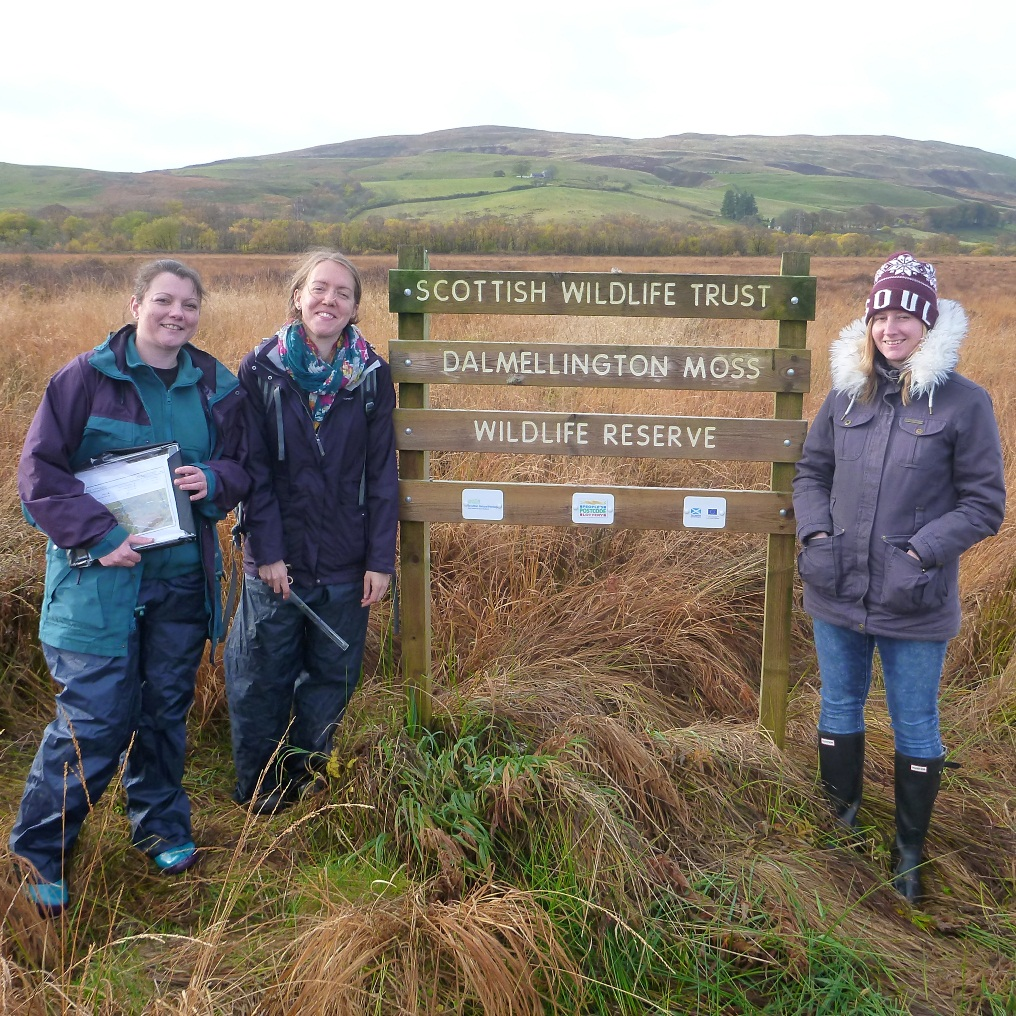 Dalmellington Moss is a Scottish Wildlife Trust Reserve and a Site of Special Scientific Interest. To describe what a bog is; it is mire that accumulates peat, which is a deposit of dead plant material – often mosses, and in majority of cases, sphagnum moss. (Keddy, P.A., 2010). The peat in bogs is important for the storage of carbon. If the peat decayed, carbon dioxide would be released into the atmosphere, compounding global warming.  Lowland raised bogs are important peatland ecosystems and the United Kingdom’s Biodiversity Action Plan establishes bog habitats as priority for conservation. (Maddock, A 2008)

The picture below of the beautiful deep red sphagnum moss was taken on Dalmellington Moss and is an indicator of how healthy the Bog is and can be seen all over the Bog. 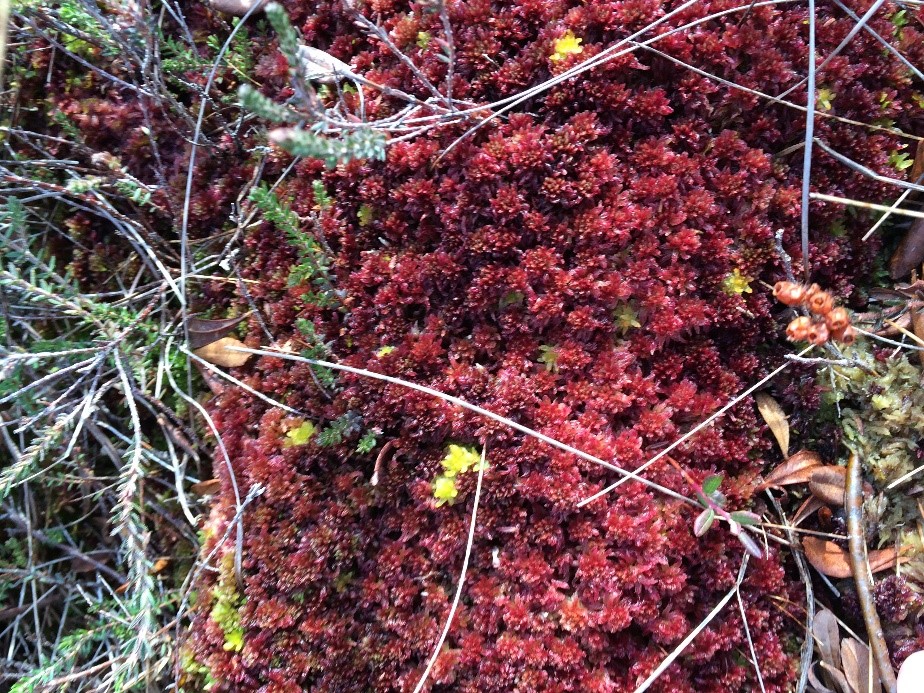 For a bog to remain healthy and keep producing peat, it must contain enough water that is also at a suitable level to sustain the anaerobic conditions required for peat production. The climate must also be sufficiently wet. A bog can only grow when the rate of accumulation of vegetable debris exceeds the rate of decay. Continued elevation of peat raises the bog surface above groundwater levels to form a gently curving dome; a description of the term ‘raised bog’. (TCV, 2015)

As the water levels in the bog are so important, they must be monitored carefully at regular intervals. Any increase in water loss will destabilise the system. (TCV, 2015)  Around the perimeter of the front section of the bog, just next to the road there is a deep drainage ditch in place to act as a flood defence for the road. Unfortunately this also has a huge impact of drying out the bog as the water is carried off the reserve. The site has also been damaged in the past by a network of ditches which increase water loss and cause areas of the bog to the dry out and become dominated by purple moor grass. At the Dalmellington Moss reserve, various measures have been put in place over the last 10 years to stabilise the water-level again. The CEI are working with their partners, Scottish Wildlife Trust, to re-wet the bog and in February 2015 a new trench bund was created running parallel to the ditch composed of peat dug up from the bog. This bund essentially acts like a large dam to prevent water loss from the bog and therefore increase the water-level. Improvements were also made to the existing plastic piling dams located on the reserve. To get an idea of the success of restoration works 26 plastic dip- wells which are monitored every month. 13 of the dip-wells have been in place since 1995, and a hydrologist put in the latest 10 earlier this year (2015). 3 of the wells are automatic which means their surrounding water can be monitored anytime using computer software.

The picture below is the map of Dalmellington Moss.

During the volunteering session, our mission was to locate each plastic dip-well around the bog, then monitor and record the water level (in cm) within each dip-well onto a data sheet. The information will be compared to previous recordings and analysed to establish the bog’s health. Sounds straightforward and generally was, but got a bit tricky when trying to actually find a few of the older ones given that they are located in surroundings which have an abundance of heather and multiple varieties of flora including dear grass. Each dip-well was indicated on a map with its own reference point so we were able to use GPRS technology, which was needed a few times! Our team on the day was made up of myself, Jennifer Dunn (CEI), Nic Coombey (Galloway and Southern Ayrshire Biosphere Partnership), and Grace Lawrie (Natural Sciences student and fellow volunteer).

Whilst we were walking from well to well, we would stop and take photos of different flora and fauna including several varieties of lichens and even fungi. 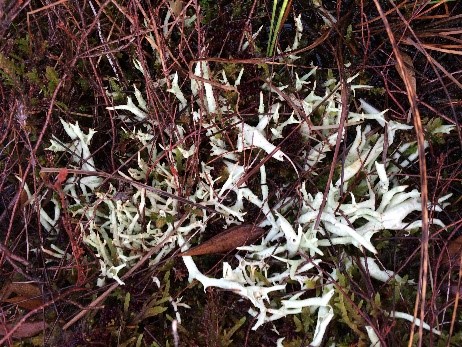 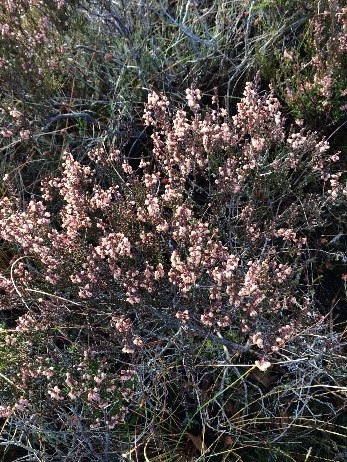 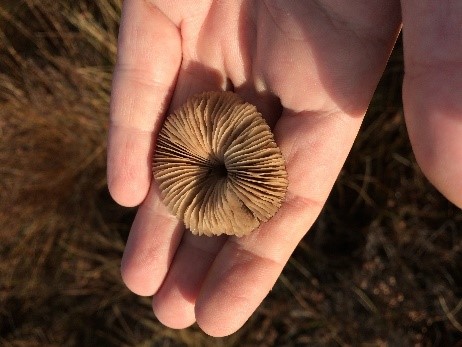 This was great for me from a practical perspective as I had never really done anything like this before in this type of environment, and listening to the passionate expertise and explanations from Jen and Nic was an excellent way to learn.  We were lucky enough that the weather was on our side and it stayed dry, although Grace got a bit wet at the end after taking a little tumble in one of the waterlogged ditches! Overall it was a thoroughly enjoyable day and as well as acquiring new knowledge in biodiversity within a peatland ecosystem I had such a good laugh too. To anyone who is interested in this sort of thing, I would definitely recommend that they get involved as it is a very worthwhile experience. Hopefully there will be more CEI events coming up that I can get involved with too.