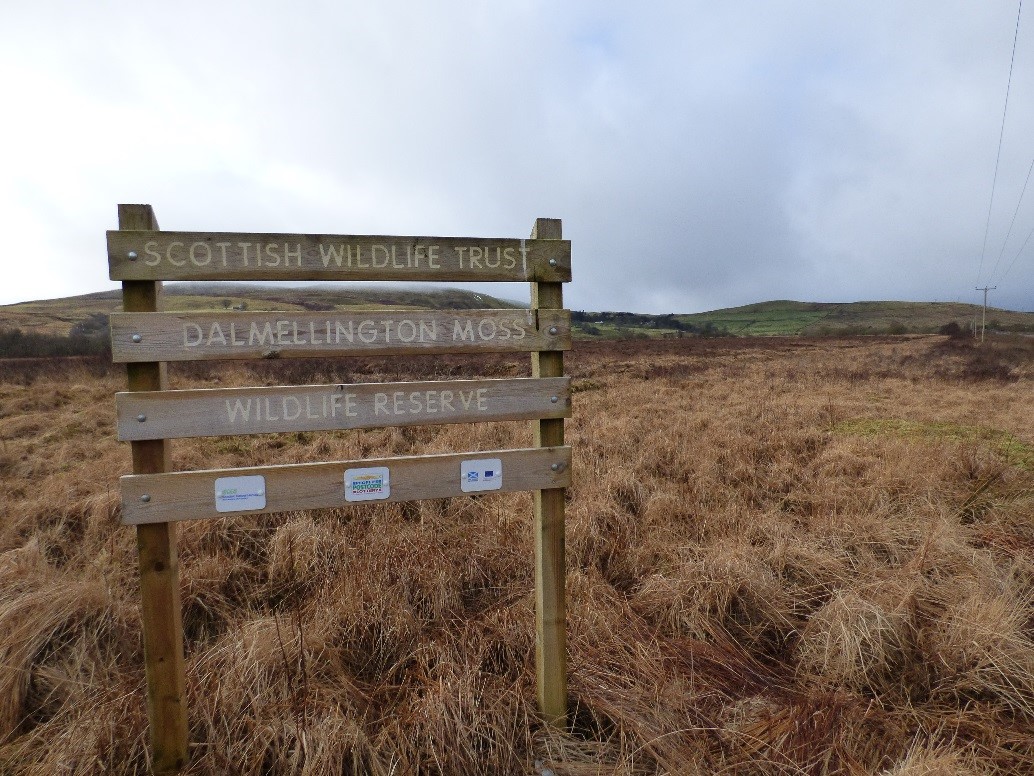 Entrance to Dalmellington Moss, showing dryer area of Molinia caerulea-dominated bog along the northern boundary of the site, 2015 © CEI

Dalmellington Moss is 28Ha of lowland raised bog surrounded by marsh, grassland and willow carr within the River Doon valley. The site is situated just west of the village of Dalmellington in East Ayrshire and is owned by Scottish Wildlife Trust (SWT), who manage it as a wildlife reserve. Along the northern boundary runs the A713 Ayr-Dalmellington road, and to the south is the Cumnock burn, which flows into Muck Water and then the River Doon. To the south of the raised bog is “Sillyhole Moss”, an area of valley mire including willow/birch carr and lagg fen.

Dalmellington Moss is home to specialist bog plants including a good assemblage of Sphagnum mosses, the principle peat-forming plant. There is also cranberry Vaccinium oxycoccos, bog rosemary Andromeda poliofolia, bog asphodel Narthecium ossifragum and bog myrtle Myrica gale as well as heathers and grasses. In areas where the site has seen significant drying, purple moor grass Molinia caerulea is dominant. Invertebrates are of special interest and include a number of scarce moths, beetles and spiders, and the locally rare large heath butterfly Coenonympha tullia. 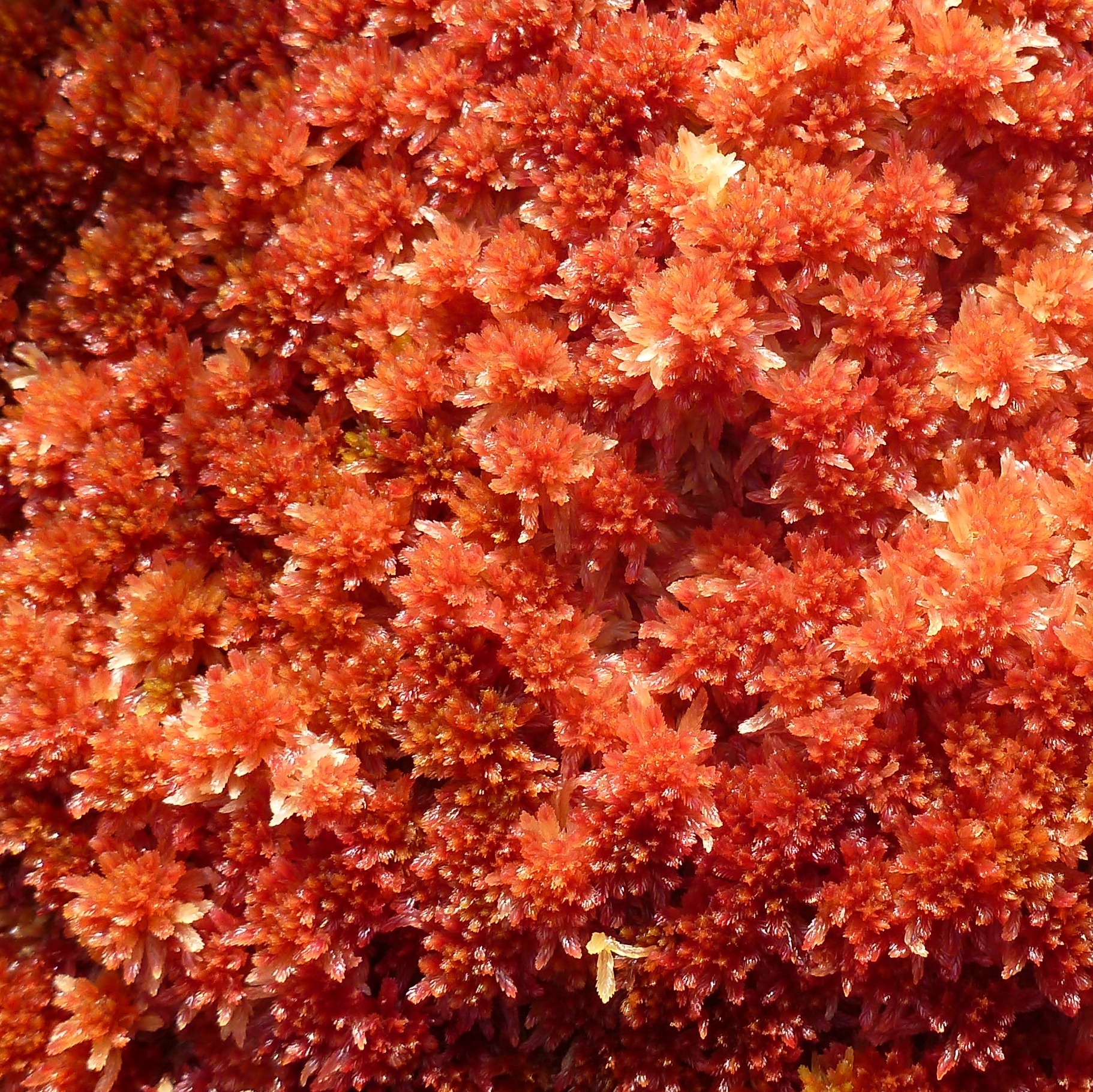 50 years ago, an extensive network of drainage ditches were cut across Dalmellington Moss. This has resulted in drying, which has led to dense heather and reduced Sphagnum cover.  There is also encroachment of birch and burning has been a past issue. Previous attempts to restore the bog include installing forty plastic-coated metal sheet dams in 1994-5, 16 monitoring dipwells in 1995, and four plastic piling dams in 2005.  The dipwells indicate that the damming did raise the water table, but not throughout the site.  A hydrological survey in 2013 revealed that the ditches were having a significant effect on the bog, and proposed a number of measures to slow water loss and raise water levels.  These recommendations were taken forward by the CEI and SWT to be carried out in 2014-15.

The re-wetting work was carried out in early 2015.  Using a low-ground pressure excavator to minimise damage to the sensitive bog surface, the operator constructed a 1.1km trench bund along the northern boundary to slow water loss via the deep roadside ditch.  The trench bund was dug to 1.5 metres, raised above the ground by 30cm and topped with vegetation to prevent the peat from eroding. The team also repaired existing plastic piling dams by pushing them deeper into the ditch and topping them with wide peat dams.  They also cleared a 30m section of ditch at the north-west corner of the site. Scrub removal, including herbicide treatment of the stumps, was undertaken by SWT staff and a group of helpful SWT volunteers.

The work carried out at Dalmellington Moss will help to protect and enhance an important peatland habitat. Through our ongoing monitoring work we are expecting to see the water table become more stable following periods of heavy rain or drought. A wetter bog will inhibit grasses and promote increased Sphagnum moss cover, providing a better quality habitat for peatland specialist plants and animals.

It is our aim that by preventing further drying and encouraging active peat formation, the bog will have a net carbon gain, helping to address climate change. A healthier bog may also help to hold water during heavy rainfall and release it more slowly, helping to reduce local flash flooding.

Dalmellington Moss is in easy reach of Dalmellington village, and provides an oasis of open habitat that can be enjoyed by nature enthusiasts or those simply craving the tranquillity of the countryside.  The site’s visibility from the main road gives it a special place in the local landscape, keeping it in the public consciousness.  By restoring the bog we are safeguarding it for future generations and inspiring people to conserve precious peatland habitats. 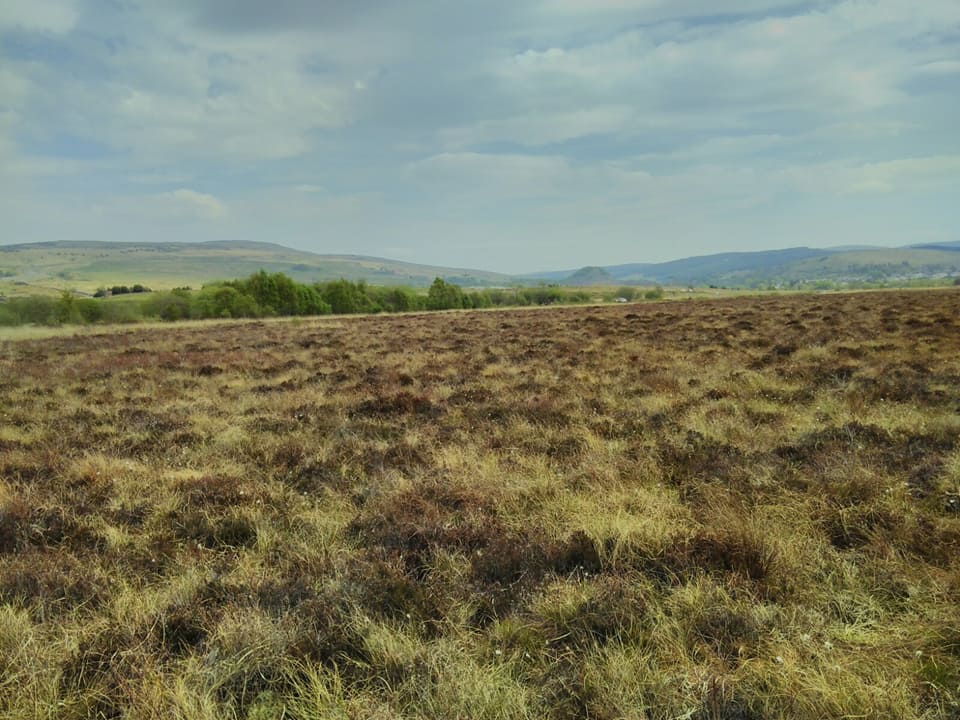 In 2015 the CEI installed a network of dipwells and automatic data loggers that will enable the CEI and SWT to carry out ongoing monitoring of the site’s hydrology and will continue to survey fixed vegetation quadrats on an annual basis.  Recent analysis of the hydrological monitoring data has shown that the water table is high and stabilising across the bog, particularly behind the new trench bunds.  However, the newly installed peat dams in a large ditch are not working as intended.  In particular, one of the four peat dams was found to retain water for less time that the other dams following a period of rainfall.  Without addressing this problem, it is likely that the areas close to the ditch will continue to be effected by water loss and result in further drying of the peat.  To come up with a solution for the leak, Project Manager Daisy invited a group of experts to visit Dalmellington Moss for a problem-solving workshop – read the write up here.

In February 2017, CEI used specialist contractors to extend the existing peat dams up the sides of the C3 ditch to hold back water more securely, adding further dams in the ditch and an adjacent ditch that hadn’t yet been dammed. Below the new ditch, contractors discovered a track buried beneath the bog that extended into the centre of the bog and then stopped!  A total of 12 new dams and four improved dams were installed at the site. 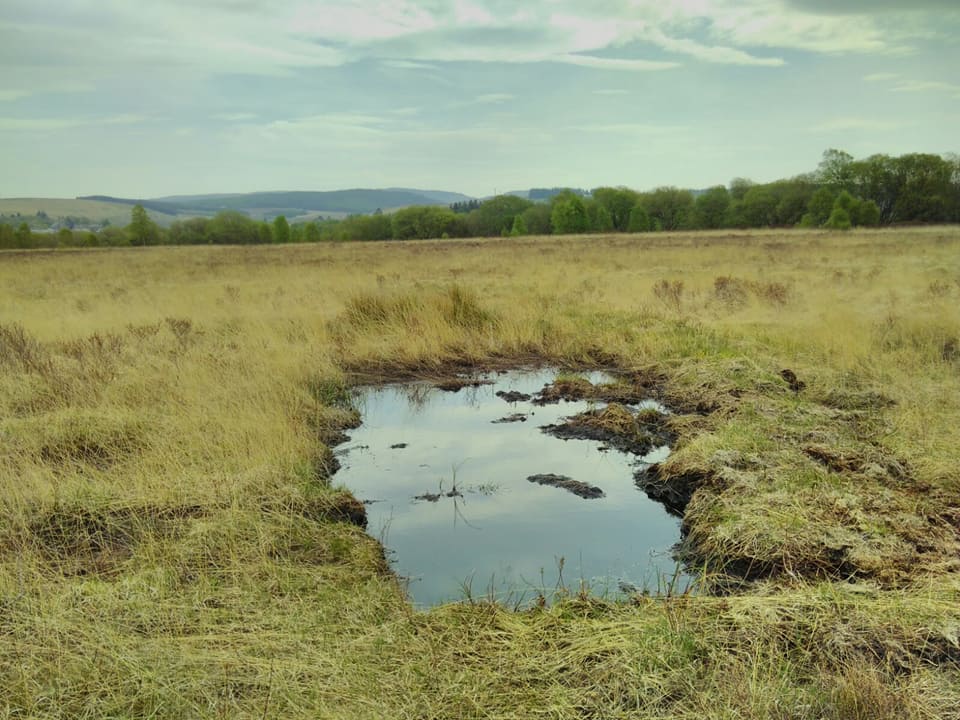 During a visit to the site in May 2017 (during a particularly dry spell of weather) birds were seen foraging in the wet pools created by the ditch blocking, and plenty of dragonflies were whizzing about. Along with the other enhancement sites, CEI staff and volunteers will continue to monitor the habitat’s health and record wildlife seen.  If you would like to find out more about the CEI’s awareness raising, education or volunteer programmes, follow the links or contact Project Manager, Daisy, on 01563533513 or at info@ea-cei.org.uk.