Alexander Black has been volunteering with the CEI for a number of years, more recently helping to monitor and survey peatland sites as part of the Nature Network and EcoCo LIFE projects. He has written this piece for the CEI BogBlog about the fascinating history of Airds Moss, one of the CEI’s peatland enhancement sites. 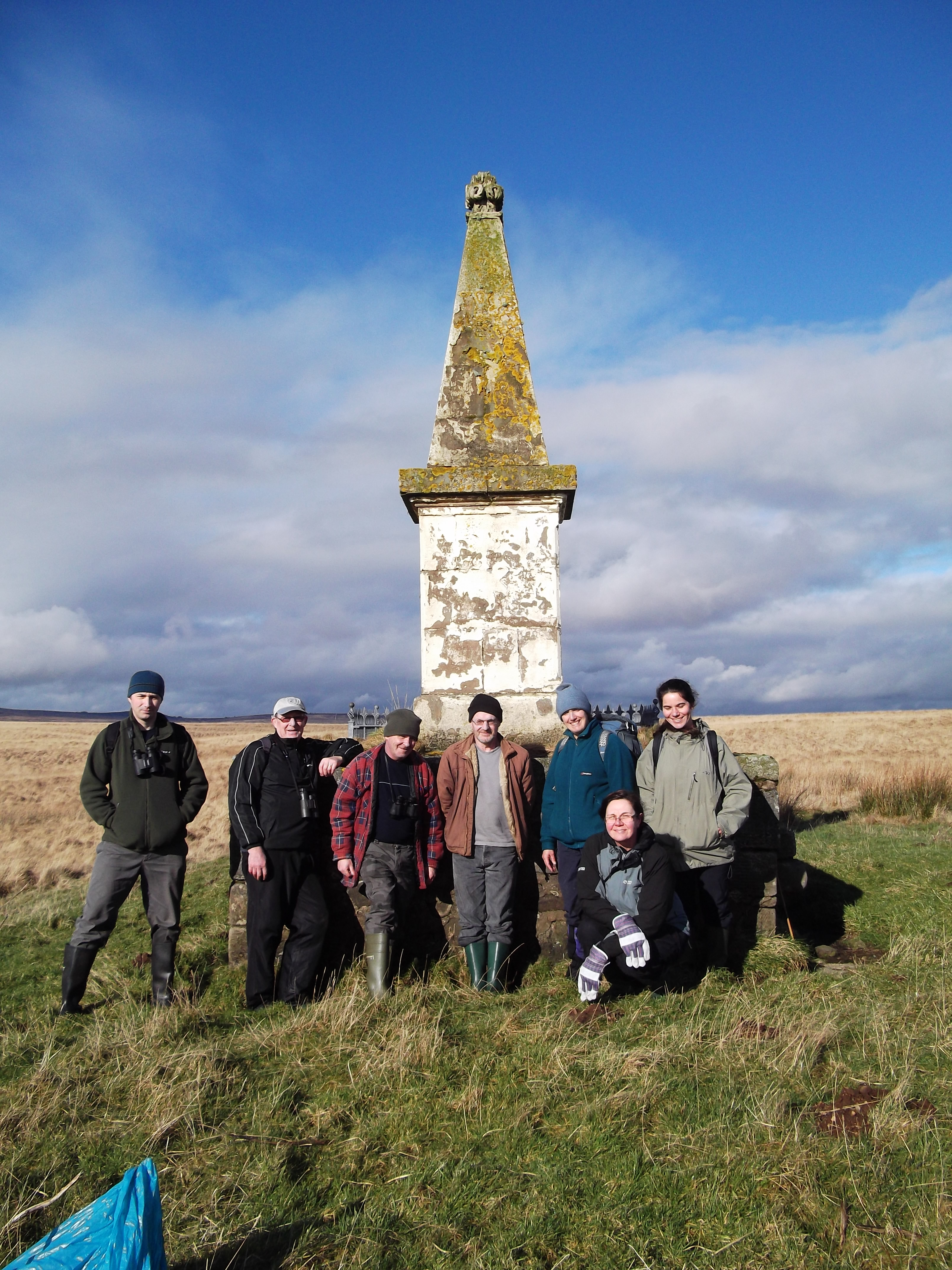 Airds Moss begins about one and a half miles east-north-east of Auchinleck village and extends for a distance of about six miles north-east and has a mean width of about one and a half miles. Airds Moss is a site managed by the RSPB and has a SSSI designation. The site is classed as an upland blanket bog with recovering heather and bog vegetation which has been subject to over grazing and drainage in the past. The site is one of several that due to its size, location and conservation sensitivity is not capable of supporting large numbers of visitors. The Blanket Bog habitat have caused it to be designated as a Special Area of Conservation. The Muirkirk and North Lowther Uplands Special Protection Area was set up to protect the population of breeding Hen Harrier (Circus cyaneus) Golden Plover (Pluviallis apricaria), Merlin (Falco columbarius), Peregrine Falcon (Falco peregrunus) and Short Eared Owl (Asio Hammeus).

Around Muirkirk and on Airds Moss there are many ancient sites, ranging from the Mesolithic to medieval times. A bronze dagger and medieval home with turf walls was found near the hamlet of Cronberry. Closer to Muirkirk and all around the area many hut circles have been found. Excavations have uncovered cremation graves along with cists that have been found. Cists are stone lined coffins dug into the ground. In the remains of the fires traces of oak have been found suggesting changing landscapes.

References to Muirkirk can be traced back as far as 1176 in writings by the monks of Melrose. The area was part of what had been known at the ‘Forest of Selkirk’ (Thomas, 1998). This land covered the area from Selkirk to the ‘Castle of Ayr’. The name Muirkirk comes from the ‘Moor of Kyle’ a parish in the district of Kyle. The origins of the place is uncertain but it seems to have been previously the parish of Mauchline which would have made it part of the barony of the earls of Loudoun. The village developed around its church which was built in 1631 and was a recruiting ground for the covenanters. The heritage lay by, by the side of the A70 at the western end of the village includes a commemoration of the covenanter activity and those who died for the cause. Other names of note are John Lapraik, a poet and friend of Robert Burn. The remains of his house are close to the junction of the Sorn to Muirkirk and Cumnock to Muirkirk roads, John Loudon Macadam who developed his system of road building is commemorated by a cairn which can be found close to the ruins of his house and on the site of his former tar works. This site is on the River Ayr Way which further along comes to a place called ‘Tibbies Brig’ which is built near the site of her house. Isobel Pagan, ‘Tibbie’ was a poetess who is reported to have written the original version of ‘Ca’ the Yowes’. These sites are close to Kames where in 1799 a mine was opened, known as Kames Colliery. By 1920 this was the sole surviving mine in the area.

On the road from Cumnock to Muirkirk a large tombstone can be seen. This is commemorated to those that died at the Battle of Airds Moss 1680. Airds Moss is not far from the village of Lugar and is located within the same parish. On the day of the battle, a party of government troops, commanded by David Bruce of Earshall was on the Cumnock to Muirkirk road when they spotted a group of covenanters. There were around one hundred and twelve government troops with a smaller amount of covenanters. Nine covenanters were killed, with five taken prisoner, the rest escaped. Twenty eight government troops were killed in the fight. The bodies of the covenanters were buried where they fell and a memorial now marks the site. Beside the memorial there is a large gravestone which lies on the ground beside it. It was during the fight that Richard Cameron and his brother Michael were killed. Richard Cameron’s name was adopted as the name of the famous Cameron Regiment.

Coming along the River Ayr Way from the Muirkirk side you come across some impressive ruins. This is the site of the Tarrioch Works, constructed in the early 1730’s and funded by the Earl of Catheart. The site is unique in that is the only example funded by the landowner and not the commercial company. As you walk along the oath by the river there are some large pits where the hematite iron ore was probably extracted, avoiding need to make expensive import of the raw material. So water runoff in the area is rust coloured showing the high iron content in the area. This is the site of the only 18th Century charcoal fired blast furnace in the South of Scotland and you have to travel a lot further north to find other such sites. Surrounding woodland was probably used to provide the charcoal for the furnace. At a bend in the river you come across a large hand dug trench. This is the point at where the sluice gates for the works are situated. This large trench, two hundred meters long, also known a ‘leat’, provided the power for the water wheel which worked the bellows for the furnace enabling temperature high enough to create pig-iron which would then go on to a forge. At the other end of this leat there was a large pond which held water for when it was needed. At this end there are two large banks which were hand built from the leat. One of the banks allowed access to the top of the furnace for loaching the ore and charcoal. Nearby is a small arch bridge which would have led to the nearby track which led to a ford to cross the river Ayr. Coming up from the other side of the ruins there are lots of building stones in the river which probably came from the wheelhouse. The furnace didn’t have a big lifespan but was closed after twenty years. The River Ayr Way travels from Glenbuck loch to Ayr and is 65km long. (Harden, 2014)